Vernon Handley - Go in the name of Angels 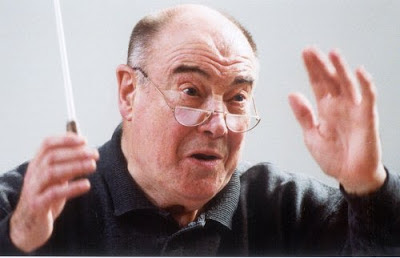 Vernon Handley died today at his home in Wales. He was born in 1930, and in his lifetime probably recorded more British music than any conductor, living or dead. He was an acclaimed interpreter of Elgar, Bax, Vaughan Williams, Finzi, and many other composers and worked as assistant to Sir Adrian Boult. I can remember a Dream of Gerontius conducted by Tod with his Guildford orchestra and choir in 1976 that was as good as any I have ever heard.

But Tod Handley wasn't just a specialist in the English pastoralists. His cycle of the Robert Simpson symphonies (except No 11) for Hyperion is one of the great achievements of the gramophone. He has recorded Elizabeth Maconchy's music, and his cycle of the Malcolm Arnold symphonies for Conifer (now re-issued on Decca) is another great recording landmark.

But his major achievements with British music were also a source of frustration to him as they resulted in his being pigeon-holed as a specialist in the field. Tod was also magnificent in Brahms and other mainstream repertoire and he held conducting appointments in the Netherlands and Australia. His championing of contemporary music should not be overlooked and he was very disappointed that he had to stop studying new scores in his later years due to failing eyesight.

Vernon Handley was a fine musician and a larger than life personality. His contribution to British music never received the recognition it truly deserved, but we are fortunate that he has left such a rich recorded legacy.

Thank you for the music Tod, and I am sure you will soon be working your magic on those celestial choirs.

* View just some of that rich recorded legacy here, and read the Times obituary here.
Photo credit Clarion Seven Muses. Any copyrighted material on these pages is included as "fair use", for the purpose of study, review or critical analysis only, and will be removed at the request of copyright owner(s). Report broken links, missing images and errors to - overgrownpath at hotmail dot co dot uk
edward elgar elisabeth lutyens elizabeth maconchy malcolm arnold robert simpson sir adrian boult vernon handley

"It is with great sadness, that the musicians, choristers and staff of the Royal Liverpool Philharmonic learned of the death of our distinguished Conductor Emeritus and dear friend, Vernon Handley CBE. Music has lost one of its towering figures, and for those who knew or worked with 'Tod' as everyone knew him, a wonderfully warm, witty and compassionate man. We offer our sincere condolences to Tod's family and friends."

"Tod, as he was known by everyone, was one of the heroes of British music and unashamedly championed British repertoire. He has probably recorded, performed and broadcast more British music than any other conductor living or dead. Tod enjoyed a long and fruitful collaboration with the Liverpool Phil, both on the concert platform and on many award-winning recordings. We last worked together in 2007, when Tod conducted a signature programme of works by Bax, Britten and Vaughan Williams at Philharmonic Hall, and we released a critically acclaimed CD of Elgar’s Cello Concerto, with soloist Natalie Clein, on EMI Classics. Tod became our principal guest conductor in September 1989, then Conductor Laureate, and in 1997, we were honoured that he accepted the title of Conductor Emeritus. His contribution to the musical life of Liverpool and the North West will be sorely missed"

"I was saddened to hear of the death of our Conductor Emeritus Vernon Handley yesterday. Although I did not have the privilege of meeting him or hearing him on the concert platform, I know of his work through his wonderful recordings, many of them made with the Liverpool Phil, and of his passionate championing of the work of many British composers. His passing is a great loss to music."

Graven Image, a new work by the Phil’s Liverpool-born ‘Composer in the House’ Kenneth Hesketh, was specially commissioned for Vasily Petrenko and the Orchestra, receiving its world premiere at the Phil's BBC Proms appearance on 1st August. The work opens the Phil’s 0809 season at Philharmonic Hall on Friday 12th September, again conducted by Petrenko. Kenneth commented:

"I had the privilege of meeting Vernon Handley when I was still in my mid-teens, when he conducted a section of my early Symphony with the National Youth Orchestra of Great Britain. I have to admit to fearing him a little as he would jokingly shout 'Hesketh' in front of the whole orchestra when he had a question, beckoning me forth with a finger. Of course, on answering the question about some balance or rubato issue in the score he would always finish our conversation by quietly thanking me, calling me Ken, and I would go back to my place in the percussion section. His immense interest in and knowledge of ornithology was evident in his need to quiz us on some obscure bird question at the end of a rehearsal, offering some prize for a correct answer by the next morning's rehearsal. It is this capriciously humorous side that I remember most from those days.

The fact that he was interested in conducting a work by an unknown 16 year old, and that he continued to respond to various questions from me during my first year at the Royal College of Music says much for his supportive nature and his interest in any sort of English music. I have wonderful memories of the depth of understanding he showed in works of Bax (Garden of Fand particularly); and his many recordings of Ralph Vaughan Williams (many with the Liverpool Phil) were my first introductions to those pieces. Another strong memory for me is his appearance in Ken Russell's Vaughan Williams tribute - the dynamic nature of his conducting style vividly captured during moments of the composers' 4th and 6th symphonies"

“Tod’s death comes as a great blow and leaves us all bereft. For my part, it has been a high privilege indeed, for some 25 years, to have had him as my mentor and treasured friend. He loved working with the RLPC and, even when wracked with pain, he came to life in the rehearsals and positively sparkled; indeed, some of our most memorable performances have been with dear Tod at the helm. He was an inspirational teacher, a consummate musician and a great man; British music has lost one of its foremost and passionate champions in his passing. He leaves a wonderful legacy of recordings, which he always saw merely as ‘benchmarks’ for those who followed; and many disciples in the “Boult Tradition”, to which he was so committed and of which he was so proud, and I consider it a high privilege indeed that he allowed me to be a part of that lineage. Now, we, his disciples, are challenged to seek to continue all the things he believed in, and thus keep his memory ever bright.

On the death of my own father, Tod wrote me a treasured letter concluding with the following words of Robert Bridges from Holst’s Choral Fantasia, which are so apposite today.

“Rejoice ye dead, where'er your spirits dwell, Rejoice that yet on earth your fame is bright, and that your names, remembered day and night, live on the lips of those who love you well.”