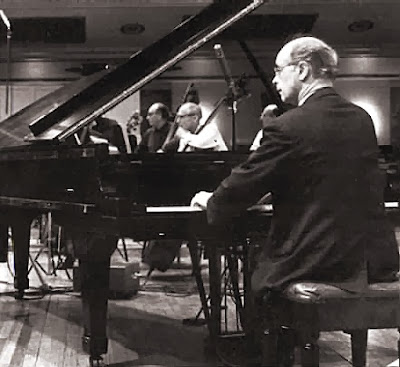 I grew up around the Boston Symphony because my father was in the orchestra. There was a time, believe it or not, when Boston audiences were more interested in music making than celebrity. The great soloists of the 1960s and 1970s were celebrated because of the way they played or the way they sang. People often went to concerts for the program, and the soloist was a special treat. I remember hearing Rudolf Serkin [seen above] play Brahms.

There were people who loved the orchestra because they loved the principal wind players. Harold Wright and Sherman Walt, for example, mattered far more than "whomever" was conducting. Bernstein may have been heavily marketed (because he exemplified, at least on the surface, the possibilities of celebrity and the popularlizing of orchestral music), but he genuinely made music. He really was a musical giant. For the Boston Symphony his celebrity was worth the price. Hearing great pianists like Richard Goode and Alfred Brendel play Beethoven or Schubert was always about Beethoven, Schubert, and excellent piano playing. Hearing Elly Ameling sing a recital of art songs was all about singing, not whom she happened to be.

I have known my share of important musicians (important because of what they could do with a phrase, a piece, or a whole concert) who had careers during the time before the great cultural change. Somehow I equate the change with the beginning of the Regan administration. That's when the culture shifted in America, and the "marketplace" moved to the cultural center. And American attitudes influenced the rest of the world.

Chamber Musicians used to rely solely on managements to get them concerts, and getting taken under the wing of a management used to be the only way of having a career. Having a "career" used to mean you had lots of concerts to play. Now having a "career" seems to mean something different for all the reasons you mentioned in your post. For the record, I don't give a fig about a career. I care only about the music.

That comment was added to Classical music is shouting so loud people can't hear it by Elaine Fine. It is being reblogged not only because is it a powerful and passionate example of writing that puts the re-heated press releases and salacious gossip found elsewhere to shame, but also because it is so true. Yes, as Elaine point out, there were celebrities in the past. But they were huge and inspiring talents and their expensive celebrity lifestyles did not extend to the legions of middle feeders that classical music now not only supports but also rewards very handsomely.

Elaine hits the nail on the head when she says the problems started when classical music became part of Western consumer culture. As a result there are now too many money junkies in classical music and there is only one way they can all keep getting their financial fixes - by expanding the market exponentially. Which overlooks two rather obvious facts. The first is that the market is not big enough to expand exponentially; the second is that attempts to pull in the entertainment-sized audiences needed to feed their celebrity money habit are not only failing dismally, but they are also driving away classical music's vitally important core market.

Superstar classical musicians may well be paid eye-watering salaries because somebody is willing to pay. But celebrity salaries raise expectations unrealistically elsewhere and create destructive tensions at a time when arts funding is under extreme pressure and fellow musicians face penury. It is a sign of the times that there is more outrage at Valery Gergiev's tenuous links to Russia's despicable anti-gay policies than to his very tangible $16.5 million income. Forget all the smart big new ideas; just tell celebrity musicians and those that surround them that available funding, the size of the market, and, indeed, the art itself cannot support multi-million dollar incomes. Until that happens classical music is living in cloud cuckoo land.

Also on Facebook and Twitter. Any copyrighted material on these pages is included as "fair use", for the purpose of study, review or critical analysis only, and will be removed at the request of copyright owner(s).
Alfred Brendel boston symphony orchestra elaine fine Elly Ameling Harold Wright leonard bernstein Richard Goode Rufolf Serkin Sherman Walt valery gergiev

Pliable said…
Joe Shelby has added the following comment to my earlier post and it is worth repeating here:

There's a reason you might see it in "the Reagan Era".

In 1978, the record industry effectively started its decline. Prior to that, getting into the record business was an instant gold mine.

After a certain point, sometime around the arrival of punk and disco (each at extreme opposites of each other, of course), the state of sales changed, considerably, in the rock/pop world. That was the point where, just like the movie industry with Star Wars, things started the shift to the blockbuster sale being the only thing holding a business together through the slow sales of everything else, was the only way to do business. Everything had to be marketed as the next blockbuster, because one really didn't know the audience (nobody thought punk would become a smash, but there it is) or what they would want (or as in the death of disco, when they would turn).

It was not an instant decline, but a steady one, with the industry fooling itself with more expensive CDs and marketing the "back catalog" (which cost them nothing to do) to the next generation as "Classic Rock". Great for the labels, but bad for new artists and for the classical market as a whole.

But in spite of those resuscitation efforts, the record industry was still failing, and new competition from cable tv (people, stay at home!), and home video sales (people, stay at home!) at into live audiences, then throw in declining sales at the general level (even before modern downloads ate even more), and you reach the current situation.