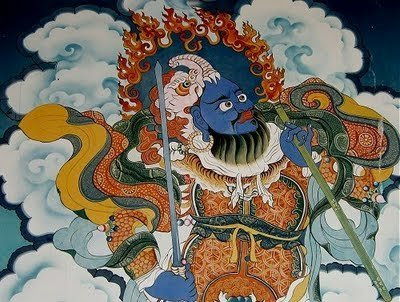 Tibetan Buddhism has received a lot of support On An Overgrown Path over the years, but I am afraid the Dalai Lama earns multiple demerits for choosing Russell Brand to front his appearance yesterday in Manchester. As part of a mutual admiration routine the senior figure of Tibetan Buddhism described TV comedian Brand as "a strange, wonderful man". Which contrasts somewhat with the words used by the UK media regulator Ofcom in 2009 to describe a phone call made by Brand to a young woman during a BBC radio programme - "gratuitously offensive, humiliating and demeaning". In recent years there has been criticism of the Dalai Lama's decreasing political engagement and increasing celebrity engagement, a viewpoint I now have some sympathy with. Header photo was taken by me at the Dashang Kagyu Ling - Temple of a Thousand Buddhas in La Boulaye, France and featured in a 2009 post about Jonathan Harvey's String Quartets.

Pliable said…
For anyone who needs convincing about the Dalai Lama's lapse of judgement here is the phone call made by Russell Brand live on BBC Radio 2 - http://www.youtube.com/watch?v=07d9ZE_1O5g
4:19 pm