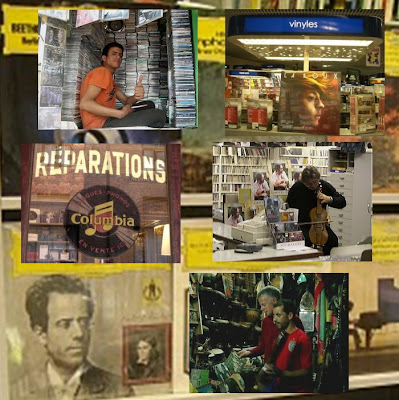 To celebrate international Record Store Day here are five postcards from music stores that have featured On An Overgrown Path recently. In the blog's typically footloose and fancy free way the stores are in Belgium, France, Britain and Essaouira and Marrakech in Morocco - just click on those country links to read the postcards. And if anyone is still wondering why we need Record Store Day here is an article I ran in November last year, and for which I make no apology for running again today. 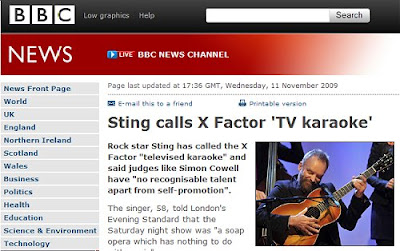 Rock star Sting has called the X Factor "televised karaoke" and said judges like Simon Cowell have "no recognisable talent apart from self-promotion". The singer, 58, told London's Evening Standard that the Saturday night show was "a soap opera which has nothing to do with music".

This no-punches-pulled story on the BBC website raises some interesting points. Let us forget for the moment that Sting has a new Christmas CD to flog, that he records for Polydor who are the bitter rivals of Sony BMG to which X Factor finalists are contracted, and that the X Factor show is aired on ITV, which is the BBC's biggest rival. Beyond these obvious points there is an even more insidious side to X Factor, and it is one Sting is not going to talk about because Universal Music, who own Polydor, play the same game. Graham Jones, one of the founders of independent distributor Proper Music, who distribute ECM in the UK, takes up the story:

Finalists in the X Factor are all contracted to Simon Cowell's company, Syco, as are all of the writers and producers, and the resultant CDs are all released and distributed through Sony BMG. The X Factor is, effectively, an hour-long television advert for Sony BMG - its artists dominate the choice of guests and, if you listen to the songs covered by the guests, you will find that a very high percentage of the material used in the show is from original recordings by Sony BMG artists.

To reach the widest audience, Sony BMG market X actor contestants through the supermarkets rather than through more traditional outlets. Its CDs will always be in a prominent position in store, often next to the till. To secure these positions Sony BMG will have offered the stores substantial discounts, which are not made available to independent stores who, therefore, cannot match the price offered in supermarkets.

Even more damaging is the impact this has on the reputation of independent stores. If CDs are £4 more expensive in independent stores, customers are likely to perceive that they are being ripped off and so, in the future, their first port of call for buying music is increasingly likely to be the supermarket instead of the independent shop.

Which is also how Sting's If On A Winter's Night CD found its way into your local supermarket. The quote above comes from Graham Jones' excellent new book Last Shop Standing - Whatever Happened to Record Shops and the following extract says it all:

In 2003 I had an idea to write a book. At that time, according to the Entertainment Retailers Association (ERA), the body that represents record shops, there were 948 independent and privately owned small chains selling music in the UK. By 2007 this number was down to 408. That equates to one record shop closing every 2.7 days. The carnage is continuing, and I felt it was important that somebody should document the interesting and varied stories behind independent record shops. 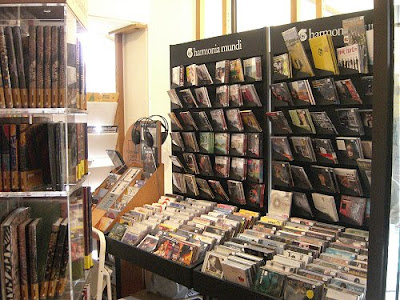 Last Record Shop standing is essential reading, and provides a priceless snapshot of the quirky and fast-disappearing network of independent music retailers in the UK. It is more lament for the past than action plan for the future; which means successful initiatives such as Harmonia Mundi's record label owned stores and their merchandised presence in independent bookstores in France, which could also work for ECM and other independent labels, are not covered. My photo above shows the Harmonia Mundi section in the independent Libraire Larcelet, in Saint-Dizier. Also missing is coverage of the turmoil in the distributor/wholesaler sector which is making it increasingly difficult for independent label's to get their CDs distributed to retail outlets.

Yes, I know the death of the independent record store is part of 'progress' and the endgame is online music distribution But, as Lech Walesa once said, it is easy to turn the aquarium into fish soup, but it is more difficult to reverse the process. Last Record Shop Standing should be compulsory reading for every record company executive and artist, including Sting. It was recommended to me, as were many CDs found on the Path, by Prelude - still crazy about classical music after all these years - Records in Norwich, who epitomise everything that is great and valuable about independent record stores. As does the one below. 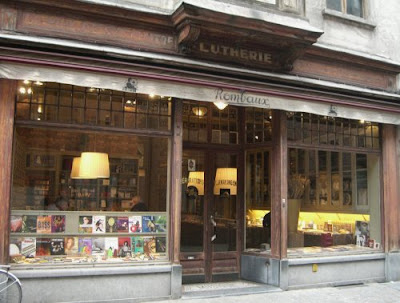 Middle and lower photos are (c) On An Overgrown Path 2009. Any copyrighted material on these pages is included as "fair use", for the purpose of study, review or critical analysis only, and will be removed at the request of copyright owner(s). Report broken links, missing images and errors to - overgrownpath at hotmail dot co dot uk
Labels: bbc tv Morocco polydor prelude records record store day simon cowell sony bmg sting syco x factor

Unknown said…
Record stores closing is a massive massive loss to the music industry, and shows the direction in which the industry is heading. The fact that large franchise music stores are also closing down says it all. Check out this music industry article on independent record stores and how to survive if you happen to own one. http://www.themusicvoid.com/2010/05/exile-from-mainstreet-the-future-of-the-local-record-shop/
3:06 pm