* Travel for the Arts and the English Chamber Orchestra are delighted to announce a 7 day Music Cruise, to take place aboard the Msy Wind Star. The musical programme of concerts by the English Chamber Orchestra under the batons of Vladimir Ashkenazy and Paul Watkins feature renowned guest soloists, and are played whilst at sea and in the picturesque ports of call - Deck 2 Per person sharing Double Stateroom $10,750

* Cunard Line is proud to announce a new partnership with the National Symphony Orchestra (NSO), an artistic affiliate of Washington, D.C.’s famed Kennedy Center. A highlight of the new alliance is the organization’s upcoming debut aboard Queen Mary 2 as featured guests of the acclaimed Cunard Insights programme. Six Kennedy Center Chamber Players and Nigel Boon, NSO director of artistic planning, will present programmes (including three performances and three lectures) on the ship’s 6-day Eastbound Transatlantic Voyage - Featuring the National Symphony Orchestra - Cruise From $1,372 per Guest

* Kirker Holidays' musical tour of Britain and Ireland is a nine-night cruise. Guests are treated to an exclusive programme of performances introduced by Petroc Trelawney of BBC Radio 3 - from £2,110 per person 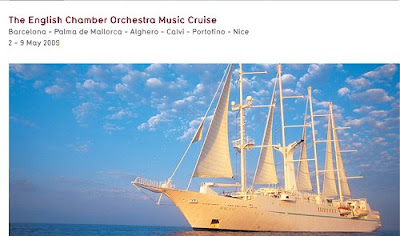 It may be an unfortunate analogy, but classical music cruises are part of that large portion of the classical music iceberg which is under the water and out of sight. As the examples above show it is not just smooth jazz groups that are taking to the waves. The Vienna Philharmonic and National Symphony Orchestras, who both receive a proportion of their funding from public sources, and the English Chamber Orchestra who do not, are all linked with cruise operators at ticket prices that would make even the world's top opera houses blush.

So what to make of classical music's new nautical audiences? Let's start with the music, and the verdict on a Baltic classical music cruise from the Times' Richard Morrison is not encouraging:

But the classical concerts? Ho-hum. I had the distinct impression that some musicians were treating the voyage as a skive in the sun, and performing accordingly. There was certainly an air of complacency in some concerts. The standard hardly rose to the level of a student recital at a London music college.

The American pianist/composer Jake Heggie and the violinist Leila Josefowicz - both big names with, you would have thought, big reputations to protect - admitted in their recital that they had met only the day before.

On the strength of their uncoordinated playthrough of Brahms and Schubert, one had to doubt how much of that meeting included rehearsal time. The veteran mezzo-soprano Frederica von Stade, one of the greats of the opera world in her heyday, sang with so little projection that when she turned her head it was impossible to hear her on the wrong side of the room.

Not good news: particularly considering the environmental impacts of cruise ships and the fact that a few massive corporations own the majority of the cruise lines, creating a labour market with unique characteristics. For instance Carnival Corporation, the largest cruise operator, includes in its portfolio Cunard (National Symphony Orchestra) and Aida (Vienna Philharmonic) and reported 2008 revenues of $14.7 billion. Then there is the thorny question of industry personalities such as Petroc Trelawny (BBC) and Nigel Boon (National Symphony Orchestra) using their principal employment by publicly funded bodies to promote their connections with for-profit organisations.

But the alternative point of view is that classical music cruises are a harmless way for performers and others to enjoy some sunshine and extra cash while reaching a captive audience, even if the music is on cruise control. Which may be difficult to reconcile with the elitist image, elderly audiences and high ticket cost of these cruises in an age when equality, youth and accessibility are mantras for the performing arts.

Confused? So am I. But one thing is for sure. Like icebergs, a little more visibility of the classical music cruise industry would not be a bad thing. 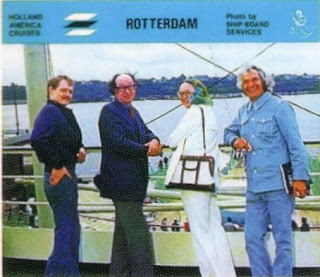 Now for a delightful piece of music tricia - a legendary recording made on a cruise ship. Jazz saxophonist and composer of 'Take Five' Paul Desmond explains:

Over the years Dave Brubeck and I have started albums in various unlikely places throughout the world, but so far this one is my favourite. We were somewhere in the Atlantic between New York and the Bermuda Triangle, aboard S.S. Rotterdam as part of their semi-annual Jazz Cruises [see photo above, Paul Desmond is second from left, Dave Brubeck is on the right]. The group included Dave, myself and a rhythm section ...

Brubeck & Desmond, 1975: the duets is the album that Paul Desmond is describing. To be completely accurate only one track, You Go To My Head, was recorded at sea. But why let that ruin a great story? This legendary album is still in the catalogue as a download. It opens with a tune that was also a Bill Evans' favourite, Bob Hilliard (lyrics) and Sammy Fain's (music) theme from Disney's Alice in Wonderland. Which is also a great tune to end a post on classical music cruises on. 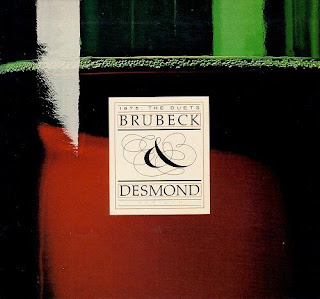 I doubt if Karlheinz Stockhausen performed on any classical music cruises. But he did share a teacher with Dave Brubeck.
Header image is from the website of Luxury Cruise Counselors who offer the National Symphony Orchestra cruise. S.S. Rotterdam photo is from the liner notes of Brubeck & Desmond. Needless to say I have never been on a classical music cruise, free or paid for. But I did buy the Paul Desmond and Dave Brubeck CD at retail from HMV in 2003. Any copyrighted material on these pages is included as "fair use", for the purpose of study, review or critical analysis only, and will be removed at the request of copyright owner(s). Report broken links, missing images and errors to - overgrownpath at hotmail dot co dot uk
BBC Radio 3 bill evans classical music cunard dave brubeck national symphony orchestra paul desmond petroc trelawny vienna philharmonic orchestra

Halldor said…
One of the nice things about concertgoing at Liverpool's Philharmonic Hall is the bronze memorial plaque in the foyer, commemorating the eight musicians who went down with the Titanic. (White Star Line was based in Liverpool and handled much of its recruitment from the city, even though the Titanic sailed from Southampton).

It used to be backstage at the Phil, visible only to artists and staff; but it was moved front of house during the hall's late-90s rebuild (which just happened to coincide with 1997's wave of "Titanic"-mania).

"They bravely continued playing to soothe the anguish of their fellow passengers until the ship sank in the deep" it reads "Courage and compassion joined make the hero and the man complete".

Now THOSE were cruise musicians!
1:58 pm