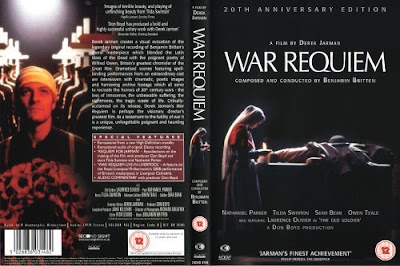 Adding images to a masterpiece by Benjamin Britten is a high risk venture. But director Derek Jarman was never one to shirk a challenge, and his 1988 film War Requiem has just been re-released in a twentieth anniversary edition DVD. Jarman's dramatic visual realisation is set to, and fully respects, Britten's music. The only addition is a superb opening cameo appearance by Laurence Olivier reciting the Wilfrid Owen poem, Strange Meeting, which Britten set for Peter Pears in the Requiem's Libera me. This was Olivier's final performance, and the 82 year old actor died the following year.

Derek Jarman, who died of Aids in 1994, jokingly referred to this film as 'The Three Queers' Requiem. This is a reference to his own role as director, Britten's as composer, and Wilfrid Owen as the homoerotic poet whose texts are combined with the Latin Requiem Mass in Britten's masterpiece. The stunning and shocking film has Jarman's signature homosexual overtones, and it serves both as a Requiem for those fell in battle, and for the victims of the terrible Aids epidemic that swept through the arts community in the 1980s. It works on many levels. If you love Britten's work it is an illuminating commentary on his pacifist views. If you still don't 'get' the War Requiem, and I know there are some who don't, this film may just make the work 'click'. The only problem is that Derek Jarman's direction is so strong that it is almost impossible to hear Britten's music after seeing the film without recalling the graphic images that accompany it. In this respect War Requiem is right up there with Lucino Visconti's use of the Adagietto from Mahler's Fifth Symphony in his film Death In Venice.

War Requiem is viewed by many to be Jarman's finest achievement. But it was almost overlooked at the time of release as it was considered to be more music video than feature film. But the critics are right when they categorise the film as Jarman's greatest work, and this re-release will, hopefully, bring it the audience it deserves. For the 2008 re-issue an illuminating interview has been added featuring producer Don Boyd, Nathaniel Parker who plays Wilfrid Owen, and, for my money and despite Olivier's appearance, the star of the film, the brilliant Tilda Swinton as the nurse. The soundtrack uses Britten's own classic recording of the War Requiem. The DVD sleeve says 'Remastered audio of original Decca recording'. I don't know precisely what that means, but the sound quality from the DVD is simply stunning, and better than the CD transfers. In today's crazy world you can buy the DVD of War Requiem for £12, which is less than the audio original. For American readers Amazon.com offer a Region 1 DVD. But check before buying; although the release date is given as September 2008 the sleeve is the original 1988 version.

Below is the trailer for the 2008 release of War Requiem. If you prefer your Britten 'straight', if you see what I mean, try the Britten-Pears Foundation introductory video.


Now men will go content with what we spoiled.
Derek Jarman's War requiem was borrowed from Norwich Library Services - can this really be true? Any copyrighted material on these pages is included as "fair use", for the purpose of study, review or critical analysis only, and will be removed at the request of copyright owner(s). Report broken links, missing images and errors to - overgrownpath at hotmail dot co dot uk
aids benjamin britten cinema derek jarman don boyd homosexuality pacificism tilda swinton wilfrid owen