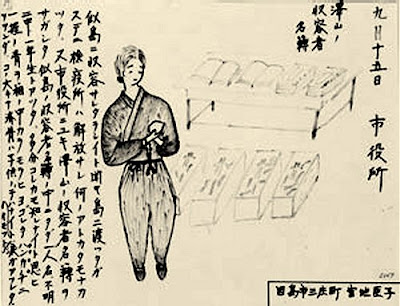 It was a night spent in the basement of a burnt out building.
People injured by the atomic bomb took shelter in this room, filling it.
They passed the night in darkness, not even a single candle among them.
The raw smell of blood, the stench of death.
Body heat and the reek of sweat. Moaning.
Miraculously, out of the darkness, a voice sounded:
"The baby's coming!"
In that basement room, in those lower reaches of hell,
A young woman was now going into labor.
What were they to do,
Without even a single match to light the darkness?
People forgot their own suffering to do what they could.
A seriously injured woman who had been moaning but a moments before,
Spoke out:
"I'm a midwife. Let me help with the birth."
And now life was born
There in the deep, dark depths of hell.
Her work done, the midwife did not even wait for the break of day.
She died, still covered with the blood.
Bring forth new life!
Even should it cost me my own,
Bring forth new life!
by Sadako Kurihara

Sadako Kurihara was at her home in Hiroshima when the atomic bomb exploded on August 6th 1945. Two days later, in a nearby basement shelter just a mile from ground zero, a baby was born in pitch darkness surrounded by the dead and dying. The seriously injured nurse that delivered the child died, but the baby survived and grew into an adult who sixty years later still lives in the city.

After the trauma of Hiroshima Sadako Kurihara was determined to express her furious hatred of nuclear weapons, and to campaign against their use. Her talent as a poet gave her a powerful outlet for her beliefs. Her most famous work is the story of the baby born amongst nuclear devastation. In Japanese it is Umashimenkana, which translates as Bring forth new life.

For the rest of her life Sadako Kurihara was a staunch anti-war and anti-nuclear campaigner. She published a literary magazine on the theme of the atom bomb attacks on Japan, and circulated an anthology of anti-war poems when discussion of the bombing was restricted by the occupying Allied powers. The author of more than five hundred poems in a writing career spanning more than seventy years, she died in March 2005 aged 92.

* International Physicians for the Prevention of Nuclear War (IPPNW) is a non-partisan international grouping of medical organisations dedicated to the abolition of nuclear weapons. They work with the long-term victims of nuclear explosions and accidents from Hiroshima to Chernobyl, and their work has been recognised with the 1984 UNESCO Peace Prize, and 1985 Nobel Peace Prize. For the last 21 years IPPNW-Concerts has been working from its Berlin office with top musicians world-wide to raise funds for their work. In 2007 a copy of IPPNW's recording of Mahler's Kindertotenlieder made at the twentieth anniversay concert of the Chernobyl nuclear power station was presented to every member of the German parliament

As well as being a fantastic cause there is some music well worth exploring available on IPPNW-Concerts' own CD label, and in co-productions with Swedish label BIS. These are all live recordings of concerts promoted by IPPNW over the years. There are forty-nine CDs in the catalogue with composers ranging from Monteverdi to Elliott Carter. The nuggets worth mining include Furtwängler's Te Deum coupled with Brahms and Hindemith (CD40).

Of particular relevance to this article is Wort und Musik - 60 Jahre nach Hiroshima. This is a live recording made at the March 2005 'Nuclear Weapons Inheritance Project' which mixes readings in German from a range of authors including Robert Oppenheimer, Enrico Fermi, Albert Einstein and Sadako Kurihara with relevent music including the aria from Bach’s Goldberg Variations, Shostakovich's String Quartet No 8 and Schubert’s Quartettsatz. On the lighter side there are also a number of jazz recordings worth exploring, including the Berlin Philharmonic Jazz Group playing live in 2004 in the Philharmonie in Berlin with the world-famous baritone Thomas Quasthoff. 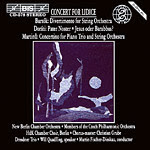 IPPNW co-productions with also contain some real gems. My own favourite is a live Missa Solemnis from the Philharmonie in Berlin with Antal Doráti conducting the European Symphony Orchestra, University of Maryland Chorus, and a distinguished group of soloists. Another BIS co-production recorded at the Philharmonie with the New Berlin Chamber Orchestra and members of the Czech Philharmonic and HdK-Chamber Choir conducted by Martin Fischer-Dieskau includes two of Doráti’s own compositions (his Pater Noster, Prayer for Mixed Choir and Jesus oder Barabbas? a melodrama after a story by Karinthy Frigyes for Speaker, Orchestra and Choir) alongside works from Bartok and Martinu. Finally among the BIS co-productions a live Mahler Symphony No 9 with Rudolf Barshai conducting the Moscow Radio Symphony Orchestra is a rarity well worth investigating. All proceeds from the sale of these CDs benefit those in dire need as a result of war, industrial and natural catastrophe. Need I say more?

Reblogged from Overgrown Path December 2005. Header - Drawing and text, Tomiko Miyaji September 15, 1945, from Hiroshima Peace site. Any copyrighted material on these pages is included as "fair use", for the purpose of study, review or critical analysis only, and will be removed at the request of copyright owner(s). Report broken links, missing images and errors to - overgrownpath at hotmail dot co dot uk

Daniel said…
The homepage that you have listed wwww.ippnw.de is the homepage of the IPPNW German Affiliate. The organization has a global homepage representing the international body and can be found at www.ippnw.org.