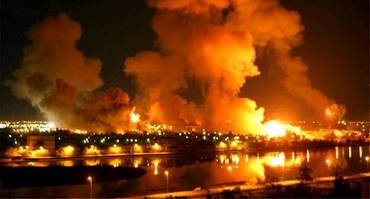 Travel Notes – new music for the viola da gamba was one of the most thought provoking CDs of contemporary music that I heard in 2006. One of the tracks is Baghdad’s Spring, and here are composer and viol player Paolo Pandolfo’s own words:

Baghdad’s Spring was born while I was on tour in Japan, in March 2003. The TV was like a window opening onto what was happening in Iraq. CNN accompanied me every moment I spent in the hotel room: satellite transmissions of an Iraq reduced to a videogame session, the camera gradually zooming in on the images of bombed targets, strategic sites, bridges, streets, cities … Reality was quite different from those images, the violence of the explosions, the terror of the people … The was seemed to boil down to a question of skill and precision, a game in which someone surgically dosed out horror and death with the click of a mouse button, undoubtedly in the interest of all the world’s TV viewers.

I remember the moment in which I decided to keep watching CNN, but with sound turned off.

The images were quite sufficient and the booming quality of the news commentators seemed superfluous, impeding a better understanding of what was really going on. Those images began soaking in silence, like a fine rain, in the small hotel in Hiroshima where I found myself. I’d already visited the museum of horror, the loose strands of memory, the deafening silence of the shoes carbonised by radiation.

My viola was there, resting against the table, mute. I started playing: the instrument produced anguished, subterranean sounds. Now it was there, on the streets of Baghdad, it was next to the fearful families transfixed by a TV screen, like I was, listening in amazement to the same news commentators who explained the characteristics of the tempest of fire which was descending on their city as if they were describing a real atmospheric disturbance, directly connected with the eye of the hurricane …. 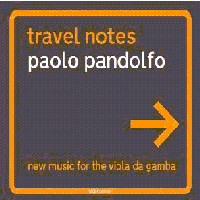 Paolo Pandolfo (photo above) is better known for his interpretations of baroque and early music. All the compositions on this CD, with one exception, are by him, and this unashamedly contemporary album for viola da gamba, trumpet, percussion and human voice is remarkable proof that today’s new music knows no boundaries.

Paolo Pandolfo wrote the notes for Baghdad’s Spring in the summer of 2003. How tragic that his words, and music, are more relevant today than they were three years ago. There is no simple gift that will bring peace to Baghdad this Christmas, even as I write BBC News reports that a suicide bomber has killed at least 10 in the Iraqi capital - horror and death are still being surgically dosed out.

* Less 'left-field' is Paolo Pandolfo's new CD of improvisations on 16th and 17th century musical forms. Improvisando is another superb Glossa release, and is certainly on my shortlist of best CDs of 2006.

For more seasonal reflections take An Overgrown Path to For unto us a child is born
Any copyrighted material on these pages is included for "fair use", for the purpose of study, review or critical analysis only, and will be removed at the request of copyright owner(s). Report broken links, missing images and other errors to - overgrownpath at hotmail dot co dot uk