In the footsteps of Scott Ross 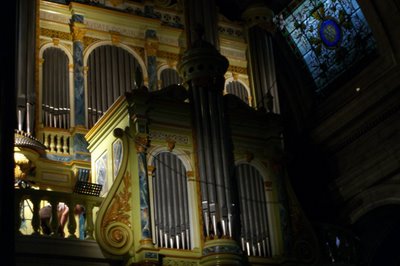 My article about Scott Ross, written in December 2005, continues to attract large numbers of readers, and An Overgrown Path made another connection with the keyboard legend when we attended a recital last year in the 19th century church of Saint Martin in Saint-Remy-de-Provence. My photo above shows the magnificent three manual organ which was lovingly reconstructed by Pascal Quoirin over a period of six years.

The superb instrument, which was completed in 1983, is used for an annual Festival d’Orgue. As part of this we attended a recital by the young Frenchman Jean-Michel Rosse who is currently organist at the Premonsterian l’Abbaye de Frigolet in Provence. The wide ranging programme spanned the 17th to 20th centuries, and was particularly valuable for the opportunity to hear two important, and little heard, composers for the organ who predate Bach, Nicolas de Grigny and Nicolaus Bruhns.

The recital showcased the remarkable tone and flexibility of the restored organ. This is a truly outstanding instrument and it is puzzling that, to my knowledge, there are only 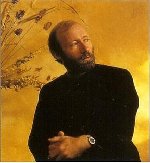 three commercial recordings of it. But we should be thankful that one of these is by Scott Ross (left) who recorded Couperin’s two organ masses in Saint Martin in 1985. But, sadly, the two CD set is difficult to get hold of as it has recently been deleted. The recording contrasts the organ with plainchant, and the same juxtaposition, using a solo singer in the organ loft, was used in Jean-Michel Robbe’s performance of the Kyrie from de Grigny’s Mass. Here is the programme for Robbe’s recital:

* To explore the music of de Grigny and Bruhns I recommend recordings of their complete works for organ, by André Issoir on Callope for Nicolas de Grigny, and Helmut Winter on Harmonia Mundi for Nicolaus Bruhns - beautiful, beautiful music which should be much better known. André Fleury's compositions can be found on an Integral Classic CD played by Thierry Escaich.

* Scott Ross resources On An Overgrown Path include * If you only buy thirty-four CDs this year - buy these ..... * The perfect ethical, and musical, Christmas present * Harpsichord magic from Don Angle * The rumour about Aids was swelling *

* Read more about Mendelssohn's organ music here, for another remarkable organ in France read Mortal defeat for the mob in Paris, and find out about Vincent van Gogh in Saint-Remy via this link.

* Now that is a first. The website for L'Abbaye St Michel de Frigolet which I linked to above is available in French, Italian and Latin!
Photograph by Pliable, copyright On An Overgrown Path. Any copyrighted material on these pages is included as "fair use", for the purpose of study, review or critical analysis only, and will be removed at the request of copyright owner(s). Report broken links, missing images and other errors to - overgrownpath at hotmail dot co dot uk